The Whitespire Birch, with a wonderful birch tree selection with snowy white bark and good fall color; higher resistance to the dreaded bronze birch borer than most other white-barked birches make this a preferred variety for home landscape use. Tall and stately, Whitespire Birch’s showy bark does not exfoliate or peel. It will create a magnificent focal point in both daytime and at night.

Betula populifolia, commonly called gray birch, is a short-lived, narrow-columnar, suckering, deciduous tree that typically grows to 20-40’ tall. It most often appears in a multi-trunked form, but also grows with a single trunk. It is native primarily from Southeastern Canada to Virginia, with a scattering of plants extending westward to Illinois. It typically occurs in both dry and wet soils. This tree is noted for (1) its non-peeling chalky white bark with dark chevron trunk patches appearing below each branch base and (2) its long-pointed triangular green leaves. Triangular leaves (each to 3” long) are double-toothed and shiny with tapered tips. Fall color is usually undistinguished. Tiny monoecious flowers appear in early spring in separate catkins on the same tree: yellowish-brown male flowers in single catkins (to 4” long) at the branch tips and greenish female flowers in smaller, upright catkins (to 1/2” long). Female flowers are followed by drooping cone-like fruits containing numerous small winged seeds that typically mature in late summer. Plants have rough-warty twigs. 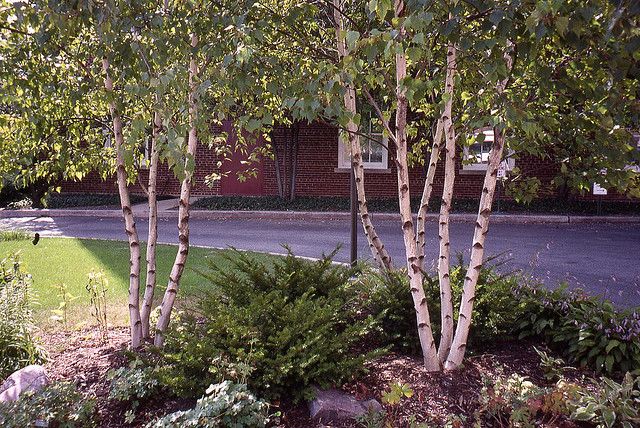